EDIT: Please read the article before saying I'm "cheating" ! The gif is a mockup made in about 10 minutes, the second picture IS NOT MINE, it's from another game used as inspiration here.

It's always a good idea to start a jam with at least a vague intention of what you'd like to do. The theme will help you define the exact design. It's my opinion, you can start without preparing that's fun too !

I want to create a survival city builder in this tiny 64x64 pixel screen, because:

I've made a few mockups to get a feel of how it could be. I want it very readable, so having the map/terrain on the whole screen is a no. I've tried showing it on a part of the screen but it felt no good enough. And finally, I've tried showing only one small part of the terrain, like one cell. It gives me tons of space for HUD, and it's actually really interesting to design a game where you can only see one cell at a time. There's a few challenges/issues :

And certainly many other I'll come across. But it's exciting. I can already think of a few solutions to try, like having a rough minimap to help you find you way. But I'll keep that for future me tomorrow.
These are quick mockups made while thinking about it

Another goal of mine is to train writing devlogs and sharing stuff everyday on the social networks. I've released a strategy shooter recently that worked well but I would have benefited from better communication skills and a more rigorous social presence.

I've looked at Godot documentation and read a few tutorials about how to setup Godot for pixel art. There's actually a lot of resources but none had everything and some of them were obsolete. So I've written a short tutorial about How to setup Godot 3.4 for the LOWREZJAM, go check it out !

I've looked at the winners' games from past years to find ideas and see how they handled the constraint. They're all really simple games, doing only one thing, but doing it right. That's a usual thing for game jam games, and even for commercial games I would say. But it is easier said than done. Within a 64x64 screen, there is a lot of simple things that become complicated. Especially about the HUD and other UI elements which role is to help the player play and understand the game properly. Add an health bar into your game and you already used about 8% of your screen space (depending of how good you want it). I've searched for city builder / strategy games; They had a very low amount of ratings, and ranked low. Each time, they were too complicated to understand, or simply unreadable even with the big efforts made.

You can look at Erdadok II. The game is impressive, it is very rich in design. Nonetheless it got only 2.8/5 on Gameplay. The game is really hard to play, really hard to look at. You can't play without the manual and a lot of patience. In my opinion, that's why the game did poorly. 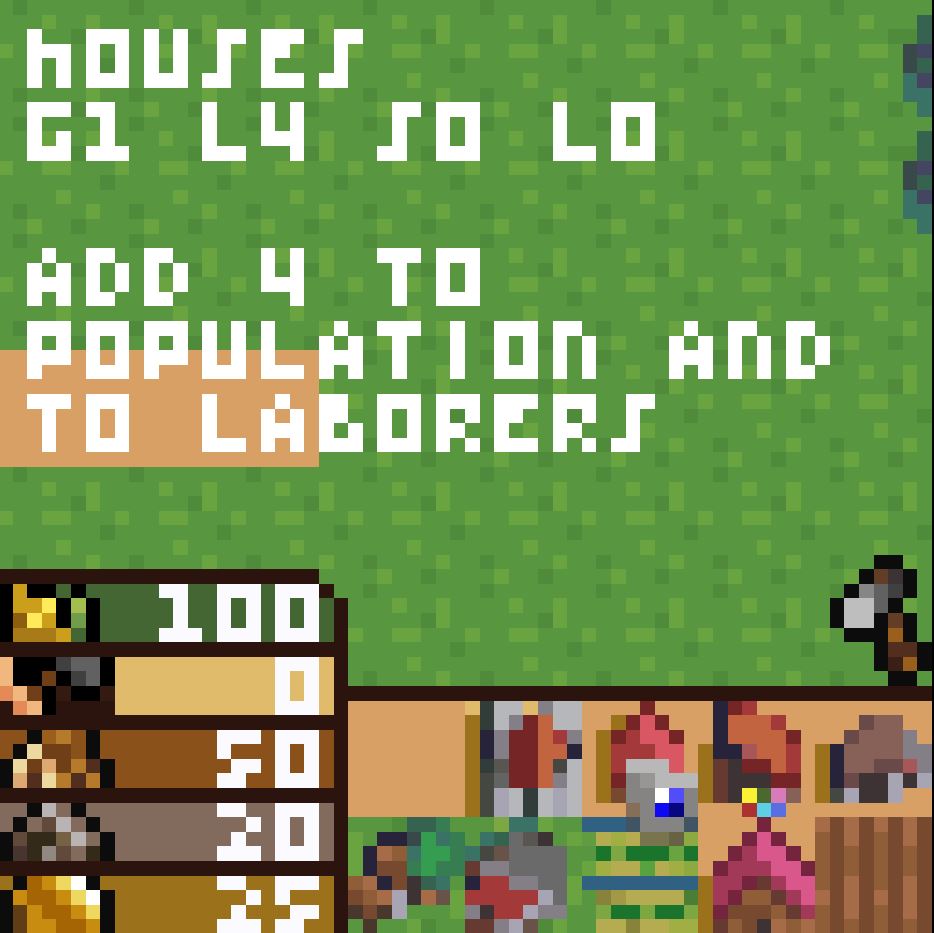 Conclusion : My priority is gonna make something readable and simple. Players need to quickly understand how to play, and I don't want them to feel lost on the screen. Yep, for a survival city builder it's gonna be hard, but let's try anyway !

Feel free to let me know your thought in the comments. How did you prepare for the jam ? Did you benchmark ? What did your learn from your benchmarks ? Also don't forget to follow me to get notified each time I post a devlog !

A minimalist city builder with bits of survival into a fantasy medieval world. And it fits into a 64x64 square !

:) hey there's my game haha
I'm glad to see your idea and I will try to follow up to see the result! Another advise I could give you is making at least 1 stage as a tutorial! That was my main flaw with this game! You can't really count on ppl to actually read guides unless they are really into the game.
Also, this is the "sequel", the first game has simpler graphics and therefore is easy to read and play.

I hope this could help you on ur journey :)

Thanks a lot for the advice !
And again well done, your game is really an achievement. I will look into the first one and see If I can get inspiration from it.
Are you participating again this year ?

I will try, I have an idea but while my code is working, is not much fun :p and well, that kind of kills the game by itself haha. I like to always be part of the jam to keep my design skills up to date.

Thanks ! Did you have time to work a little on your game ?