I did not have a lot of time to work on the game since the start of the jam. But let's see my progress anyway !

I'm gonna make a grid based survival city builder. I decided to have 4 resources, it's the maximum I can fit on the screen without making a mess. It also keeps the game simple; the biggest challenge is gonna be to make something interesting but refrain from going too far. Mostly because I won't have enough room on the screen to feedback everything right, and the more you hide things to the player the less he understands your game (and not every player is gonna make an effort to understand). For example, I'll have a "population" resource, that is just gonna be something you can produce and spend on structures. Usually the population is represented by people doing stuff in your city, but it would be a nightmarish to feedback this on 64x64 screen (people who die, people who are angry, etc...).

First thing I started to do was thinking about what I call "grid mechanics". Mechanics that are related to this 2d grid, to the relations between cells. Then I listed Terrains and Structures that I could have in the game. Each one must be used with a grid mechanics to be interesting (It should not just generate resources). This is what the player is really gonna play with, finding the best arrangements possible depending of the grid constraints, terrain and other structure. I'll list this in more details tomorrow. 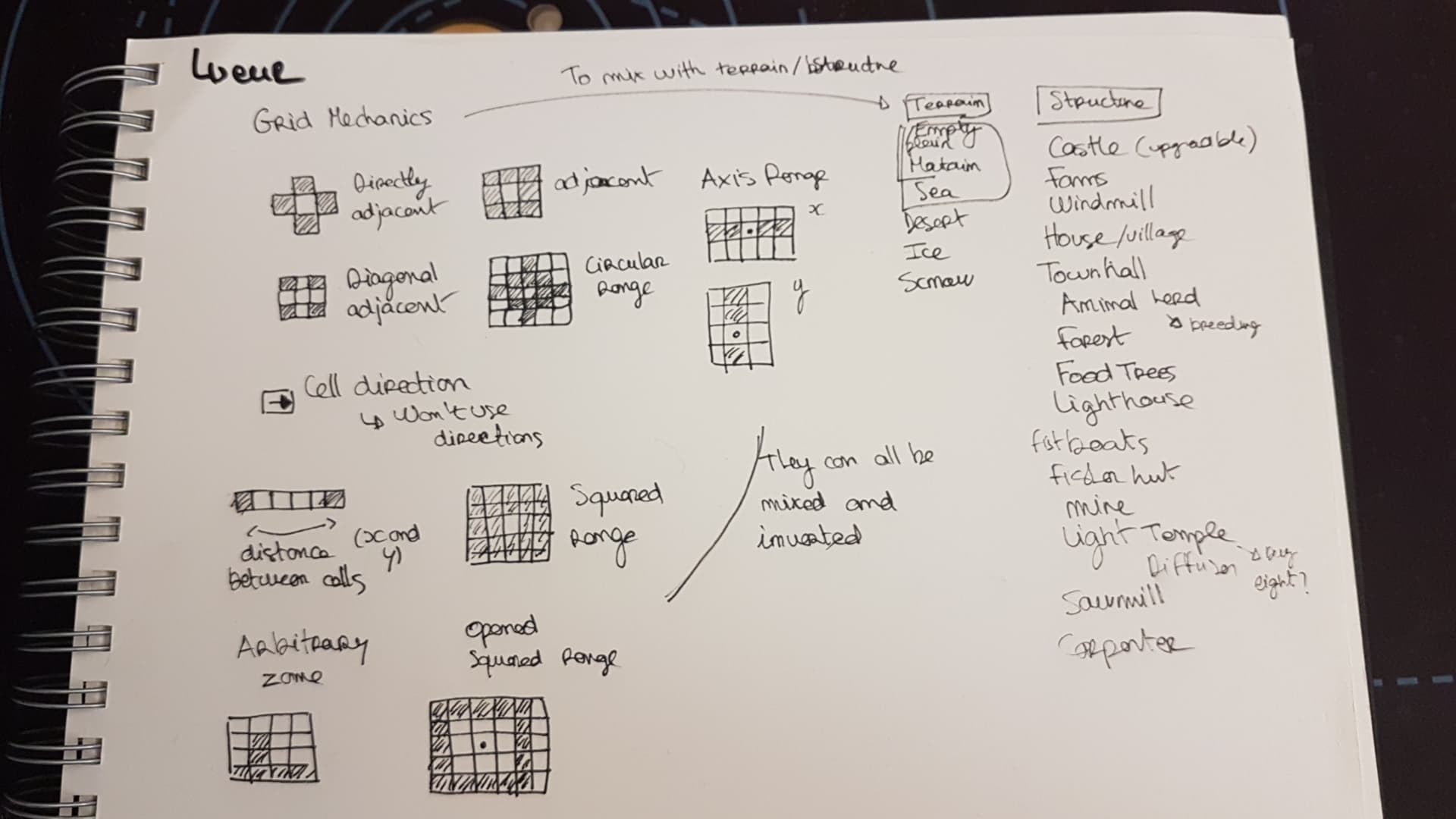 As I said before, my idea is that the player can only see one cell at a time. This allows me to fit the HUD while keeping a clean and simple screen that is not gonna be too hard on the player's eyes (and brain). Here's my idea : You control the only light in the world, people need the light to not fall into darkness. When your "light" resource goes out it's game over. It justifies pretty well why we can't see the whole world at once. It's been a while since I've used Godot; I'm pretty rusty. I started with this light, never did this before but it should be nice to get into it slowly. Turns out it was actually really easy, there is a 2d light node and with a specific mask and a simple tween for the animation it's all set.

As you can see, I actually decided to let the player see a little bit of the surrounding cells. With 8x8 tiles it does not take too much space on screen, and it looks fine. It will be easier for the player to remember the map this way. It might also come handy for the grid mechanics. I might work again on this light to make the darker sprites change hue.

Oh btw, I called the game "Lueur" for now. It's french for gleam/flicker/glow.
Feel free to let me know your thought in the comments. How did you designed your game ? Have you made much progress yet ? Was it hard to get back into programming with your engine ? Also don't forget to follow me to get notified each time I post a devlog !

A minimalist city builder with bits of survival into a fantasy medieval world. And it fits into a 64x64 square !

Looking cool, big fan of simulators like this so this is getting a play and rate from me at the end for sure!