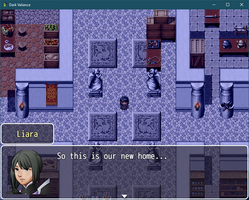 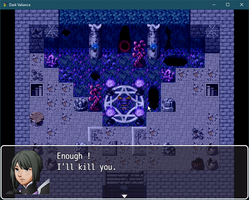 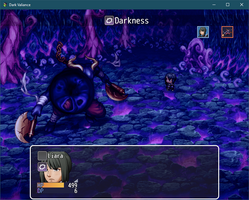 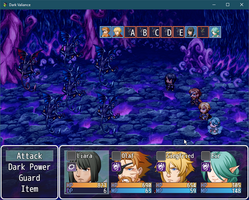 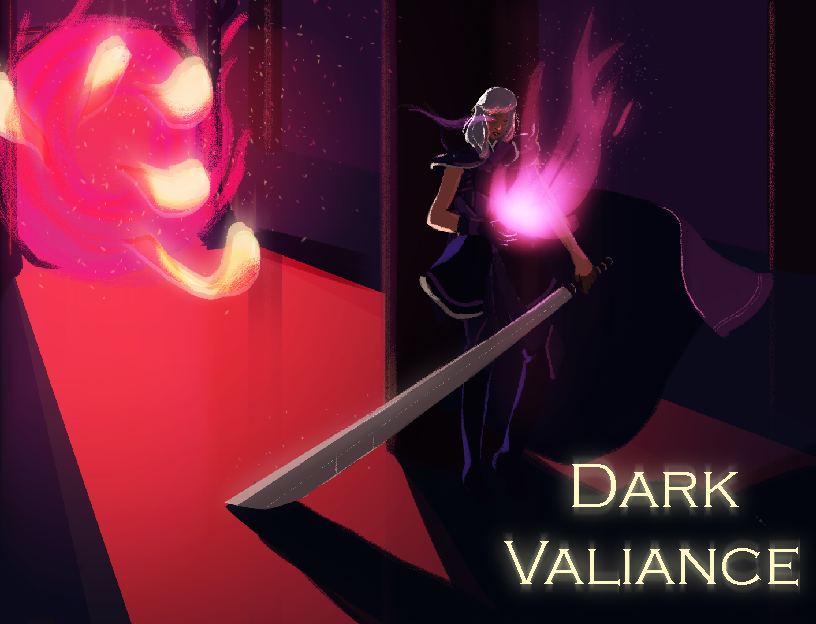 I didn't have time to write a Devlog while finishing the game, there were just too much work to do. So in this last Devlog I'll talk about the designs I created for this game, what were my ideas, how I put them and why I did that. There are of course spoilers, so you should play the game before reading further.

In short, Dark Valiance is an RPG with turn based battles. There is no Farming, no Dungeons to explore, no surprise battles and it's totally linear. The particularity resides in its specials Dark Powers, its story and the way battles are managed. The game works with a day/night cycle. During day the player can rest, buy items/equipment etc... During night he goes into the keep to fight a boss monster. The main  reason is because I want to focus the game on battles and the influence of dark power. For the latter, maybe more NPC with more dialogues would have been good.

I hate farming, I hate repeating the same pattern of attacks over and over to beat the same monsters. You can fight multiple times the same group of monsters, because it's fun to learn their pattern and find the best way to deal with them. But going to a place to win battles after battles against the same monsters in order to gain enough XP/Money to beat the next level... no. The same with surprise battles or "random encounters", when you're exploring a dungeon, trying to resolve a puzzle, and that every 20 steps a battle pop out of nowhere and breaks your immersion into the exploration. It's very personal, I don't blame the ones who love that. So I choose to exclude Farming/Random encounters in this game even if it's a key element of battle RPGs.

Moreover, it allows me to have full control over the player's level. The player will never be too strong or too weak during battles. It can just be a little stronger or weaker, depending of the choices he made (Didn't use Dark Powers, items bought etc...). It's easier to balance battles that way, and since I want to focus on battle, that's a good point. Plus, the player won't be frustrated like "Arf I need to px..." but if he does not achieve to win, well... he'll be.

How to manage the Dark Powers (DP) ?

I created the party with characters that will synergies with Liara' s abilities.

As said, I control the level of the player. It allows me to set pretty accurately what the player can do (like giving him an anti-ailment spell just before a fight against a boss using ailments).

There are five possible endings :

What to do better ?

With the time limit, a lot of things have been rushed. One thing I wanted to make better are the dialogues. I wanted to have different dialogues each day for each characters and depending of Liara's DP amount. I wanted more NPCs, and the possibility to observe objects on the map. That way, I should have been able to let the player know more about the world and about the characters themselves, but also to experience the judgment of the other characters regarding her Dark Powers.

The customization, it's something most RPG players like. I didn't have much time to balance bosses, so I just put some equipments here and there. The player does not really have a choice, and can't really customize the characters.

I can't talk much more about the game, because the post would be too long for someone to read it (is it already ?) It was great creating Dark Valiance. I had a lot of fun using RPG Maker MV and creating plugins for it. It's been a long time since I wanted to create an RPG about this theme, so I'm glad I finally did it. I wanted to make a better version of this game quickly after the jam, but you know, other things came up ahah. I'll be glad to discuss with you the design choices I made, don't hesitate to comment or contact me !

Resist Darkness or embrace it. Will you be consumed by your own powers ?